All of Coastline Adventures’ instructors are Red Cross CPR/AED and First Aid Certified. Both our school and senior staff are certified by the National Surf Schools and Instructors Association. Our school is fully insured and community-supported. Coastline Adventures also believes in giving back to our community through environmental and charitable events. 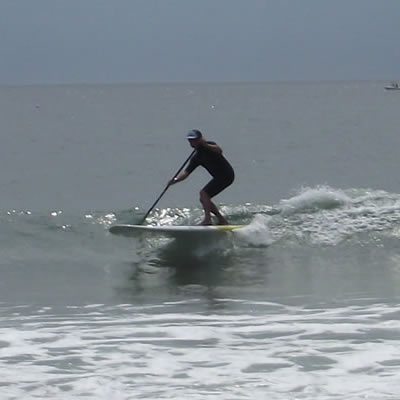 He created Coastline Adventures Surfing School of New Jersey in 1995 because of his desire to share his love of surfing with others. Lance wanted to offer a safe and easy way for people to learn this challenging sport. His career in board sports has included many surfing and skateboarding contests, fundraisers, endorsements, and product testing. He has been photographed for various surfing and skateboarding magazines and local newspapers.

Glen Friedman of the ‘Dogtown’ movie has also photographed Lance skateboarding and included his picture in his best-selling autobiography. Lance was featured in the new surfing film, “Drawing Lines”. In 2006, he was featured in the TV show “Whata You Do”, shown on the USA Network and the Fox Network.

Lance grew up surfing on the jersey shore. He is grateful to be able to share his passion for surfing at Brick Beach 3 – the very same beach he learned how to surf on. Lance has traveled far and wide to surf the waves he loves and enjoys surfing along the East Coast and California. 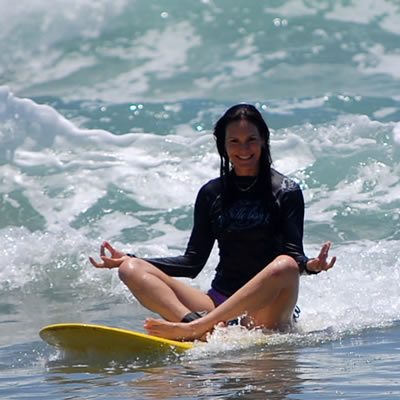 Jennifer is a Master Level  Certified Surfing Instructor for the NSSIA and one of the first women to achieve this status in New Jersey. She is also a Licensed Massage Therapist, Certified Tai Chi, Qi Gong, and Meditation Instructor, and a Registered Yoga Teacher. She has been working and teaching in the health and fitness field for over 32 years. She owns a successful massage and wellness practice and has been featured in numerous newspaper and magazine articles about surfing, massage, and Tai Chi.

Jennifer combines her passion for surfing, stand up paddleboarding, and her vast knowledge of the body and movement to create a unique teaching style that inspires and motivates. Her teaching experience, attention to detail, and ability to create a safe and enjoyable atmosphere has earned her the reputation for hosting New Jersey’s premier Women’s Surf Retreat. Jennifer is an avid water woman and has over 42 years of ocean, bodyboarding, and surfing experience.

Traveling the globe to follow her passions has taken her through the Americas, across to Europe, and through many islands. Jennifer lived in Hawaii for 8 years where she fell in love with the islands and its people. During her time in Kauai she learned to sail, scuba dive, ocean kayak, and took her surfing and body boarding to the next level. Jennifer loves traveling, spending time in nature, eating and preparing vegan food, snowboarding, and studying and practicing Tai Chi, Qi Gong, and Yoga when she is not playing in the ocean. 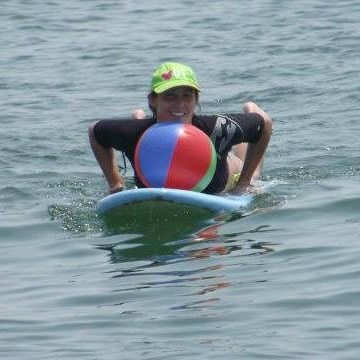 Stephanie started working with Coastline Adventures Surfing School in 2008 and has been with us ever since. She learned to surf in Atlantic Beach, NC with a lot of positive encouragement from her North Carolina “Surfing Family”. Stephanie moved to New Jersey during her senior year of high school.

She is a graduate from Monmouth University, with a Bachelor of Science degree in Mathematics and a minor in Marine and Environmental Biology and Policy. She re-chartered the Monmouth University Surf Club and held the position of President for 2 years and was the Captain of the MU Surf Hawks – their Surf Club team.

She competes in the local Eastern Surfing Association contests in both the Women’s Shortboard and the Women’s Longboard Divisions. She considers herself very lucky to travel to various places to explore and surf. Her travels have taken her all over the east coast of the US as well as many countries including Spain, Portugal, Italy, Greece, El Salvador, Gibraltar, and Costa Rica. She has been able to surf at amazing breaks in Puerto Rico, Virginia, Florida, North Carolina, Costa Rica, El Salvador, Spain, and Portugal.

She won First Place in Central NJ ESA Women’s Longboard Division in 2013, 2014, and 2016 and is currently the east coast champion. In June 2015 Stephanie participated, trained, and passed the National Surf and Instructor Certification Course. She is now a Senior Level NSSIA Surf and Stand Up Paddleboard Instructor.

Other than surfing, Stephanie enjoys hanging at the beach, listening to music, dancing randomly, and spending time with her friends. 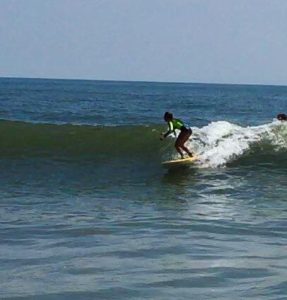 Lindsey began her surfing journey as a student of Coastline Adventures 15 years ago. She enjoyed surfing so much that she continued on her own for a few years, typically at her local spot at Brick Beach. Four years ago we called on Lindsey to help out with camps. Due to her winning personality, strong communication skills, and professionalism, we invited Lindsey to officially join the Coastline team in 2016 and couldn’t be happier that she accepted.

Lindsey attends the University at Buffalo and is majoring in public health with a minor in nutrition. In addition to surfing, she enjoys hanging out at the beach, boating, volleyball, and hiking. After graduation, she plans to move to Virginia so she can enjoy both the beach and the mountains. 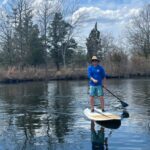 Ray’s expansive water experience and knowledge spans decades.  He began body surfing and mat riding waves in Belmar during the 50’s, to surfing in the 60’s and 70’s, boogie boarding the 80’s and 90’s all the way thru to present. Ray’s passion for the last decade has been Stand Up Paddleboarding.

One of the first 8th Ave Belmar surfers to dream about surfing in Oahu, Ray first discovered surf all over the states from New Jersey to Virginia to Florida to California and finally made his journey to Hawaii to realize his dream. Ray believes there is no place better to be than in the water and enjoying what Mother Nature has to offer us.  College-educated and a Veteran of Naval active duty during the Vietnam War, Ray worked as a project manager for AT&T and now lives in Brick, is married and has two sons. Ray is CPR and First-Aid Certified, a Karate Black Belt, and an avid fisherman. His latest position was as a Personal Trainer and Lifeguard with a major Fitness facility.  This is Ray’s eighth year with Coastline Adventures as a SUP instructor and he looks forward to meeting and sharing his SUPer knowledge with you! 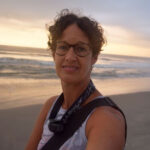 Native of a small Kansas town, Tyler relocated to the east coast to pursue a graduate degree. She’s been here ever since, staying mostly for the beaches. When she’s not teaching high school math, she considers herself a “student of life”—constantly exploring, learning, and trying to perfect her craft. It’s easy to take pictures, but it’s nothing short of a hustle to cultivate a company while taking care of a family and an existing career. 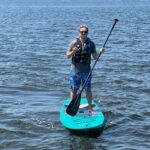 Anthony is currently a double major in Robotics Engineering and Computer Science at the renowned Worcester Polytechnic Institute in Massachusetts. He is a soccer goalkeeper and plays underwater hockey at WPI. He enjoys paddleboarding, surfing, knee boarding, kayaking, boogie boarding, boating, sailing, snorkeling, fishing, and basically anything else on or in the water. Anthony started boogie boarding at the Jersey Shore before he could even walk. He learned to paddleboard in Mexico seven years ago and learned to surf five years ago in Ocean City, New Jersey. He enjoys traveling, especially in tropical locations, and is a big foodie. He is excited about sharing his knowledge and spending his summer in the water with you! 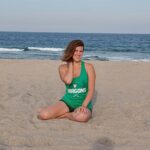 Hi, my name is Melissa and I’ve taken lessons with Coastline Adventures Surf Camp for 6 years and have had so much fun with Ms. Jennifer and Mr. Lance . This will be my first time working as an assistant for Coastline Adventures. I can’t wait to meet all of you this season! A little bit about me. I will be going into the 11th grade at Brick Township HS in September and I’m a varsity field hockey player. I also have a part time job at Hollister in the Ocean County Mall. Next year I’m hoping to get into the OCVTS Dental Assistant Program. In my free time I enjoy spending time with my family, friends, reading, journaling, watching Netflix and anything outdoors.

Had a stand up paddling boarding class with Ray. He was amazing!!! Really taught us and made sure we all were comfortable on the board. Also let us venture and do out own thing. Highly recommend taking a class. Had such an amazing experience and will definitely be back

Wow! The women’s camp yesterday was so much fun. These are GOOD people and they really, really know how to teach. AND manage expectations! 5 stars! Love it. Going back!

Jennifer and her team were awesome! Had a surfing lesson scheduled for my husband’s 49.5 birthday party in which 7 adults participated.  They were professional yet friendly and helpful and everyone enjoyed it.  Looking forward to putting my kids in the camp next year!

Wonderful day on the water….my instructor, Ray, was very patient and encouraging. I felt that I really got a good workout!

The staff at Coastline Adventures were wonderful and our day was amazing!!! I would highly recommend them–and we’ll definitely do it again!

My whole family has studied with Jennifer and they all agree: Jennifer is a wonderful surfing instructor. Jennifer embodies “soul surfing,” where grace, form and reverence are at the center of the sport.  I highly recommend this talented and gifted teacher.

I purchased a SUP lesson and eco-tour for a Father’s day gift. We booked on-line (very easily) and showed up! Our instructor was Ray and it was an amazing time. His demeanor was calming and allowed for confidence in a beginner like myself. The lesson took you through proper techniques, as well as allowed you to take in the sounds/sights of nature. We definitely recommend and will be returning ourselves!

We had an amazing time! Thanks, Lance!

Great experience with a wonderful instructor!

Year round (off-season) surf and SUP lessons available by appointment only.

Stand Up Paddleboarding Location:
By appointment only- Location varies.